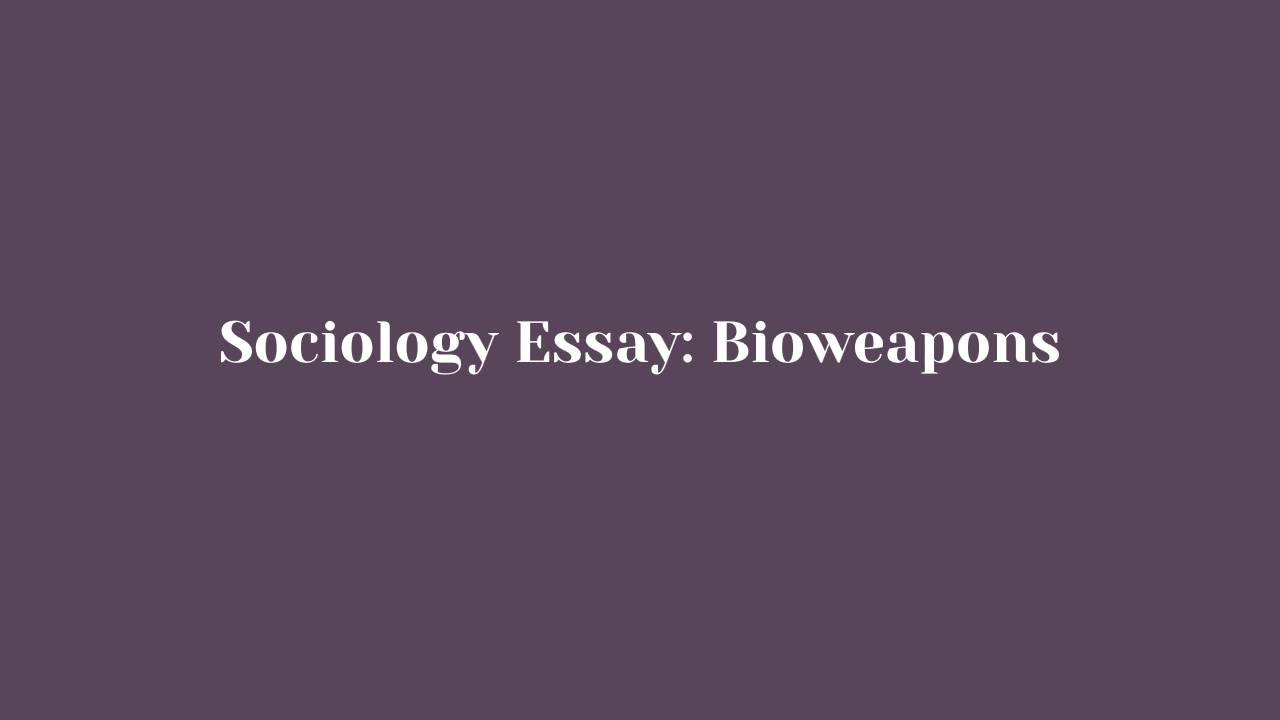 The cardinal changes in the tactics of warfare have led to the emergence of a new word in the military vocabulary – bioterrorism. This is a new form of traditional terrorism. The use of living microbes and the technologies based on them is called biological weapons. The major purpose of this type of terrorism is intimidating or killing people, destroying livestock or crops. Biological weapon is a kind of a secret war that differs from the conventional means of conducting warfare. The danger of bioweapons is determined by the very nature of biological agents. Moreover, the number of biopathogens that can cause the diseases of people, animals, and agricultural food crops exceeds today the figure of 3,500 (Naff, 2016). These diseases might include plague, cholera, anthrax, smallpox, and others. They could be potentially attributed to the components of biological weapons due to their deliberate spreading through the food, water, insects, or by air if they are in aerosol form. Viruses mostly possess no color, smell, or taste, while the effects of their action may be delayed, appearing long after the victim has been infected. The research of the common and distinctive traits and features of the organisms as well as the elements of their lifecycle that allow them to be used as bioweapons is vital for enriching the knowledge base and finding the efficient strategies of fighting them.

Firstly, the common features of the organisms, which can serve as bioweapons, should be considered. The first trait that unites them is the fact of their action on the living organism. When it is infected with bacterial or viral agents, the disease does not come immediately since it has a hidden incubation period. During it, the disease does not manifest itself with characteristic symptoms. Furthermore, and the affected person or animal does not lose their immune capability. Some diseases, such as plague, cholera, or anthrax, can be transmitted from a sick person to a healthy one and cause an outbreak because of its rapid spreading (HomelandSecurityMgmt, 2014). Another similar feature is the fact that it is difficult to determine the use of bacterial agents and the type of pathogen since neither microbes nor toxins have the color, smell, taste, and the effect of their action is delayed, which means that it may appear only after a long period of time. Finally, the detection of bacteria and viruses is possible only with special laboratory studies, which takes a considerable amount of time, and this fact makes it difficult to implement measures on the prevention of epidemic diseases on time.

The distinctive feature of the organisms, which makes them different from each other, concerns their level of resistance to environmental factors. Thus, the majority of viruses are not resistant enough to various environmental factors. Another distinctive feature concerns the resistance to medical treatment. For example, it is easier to treat small pox than plague. The organisms also differ by their conditions of storage and dispersal.

The organism can be defined as a successful bioweapon due to the following elements. The elements include the penetration of the cell or spore of the disease organism into the natural environment. Another element lies in infecting humans or animals with microbes or spores. Furthermore, sick persons or animals spread this. Disease. The final element is the death of the victim.

In conclusion, it should be noted that increasing the knowledge basis related to the biologic agents’ data is vital since it allows understanding the mechanism of biological weapons better and taking preventive measures. The similar features of biological agents include high virulence, quick and rapid distribution of the disease, absence of characteristic symptoms, and the high complexity in the detection of bacteria. The differences existing between the agents include different level of resistance towards environmental factors, medical treatment, and the distinctions in the conditions of storage and dispersal. The life cycle analysis manifests that in most cases, people and animals become the source of spread of the diseases, used as bioweapons.